So, this past week, I took a break from what has become routine to me in the last two months. It’s hard to believe that I’m half way through this beautiful experience, but reality hit as we drove away from campus; I will be driving away again in two short months, as I say goodbye to Uganda and come back home to a new season of life. SO quickly time can escape me—I like to think ahead. And although I’ve already learned so much from Ugandan culture about simply being present, God had more to teach me last week.

A little more background; every year around this time, the Uganda Studies Program drops off all the students (social work and other tracks) to different homes of a rural village in Uganda. The students all stay a full week, learning about a different culture, and experiencing rural life. Mukono, where the campus is, and Kampala are both fairly westernized in terms of culture, but most Ugandans staying in those places “go home to the village,” as they would say, every so often to visit the family and tribe they’ve left there.

Kapchorwa, the district that we went to last week, features Mt. Elgon right on the border of Kenya and Uganda. The village is called Sipi—also the name of the waterfall that comes down the mountain in three different spots. So essentially, I was living on the side of a mountain, surrounded by waterfalls for a week. I NEVER got used to the view from my backyard.

A new language, a new family, and a new culture. I still don’t know if I was excited or not—certainly, I was amazed to be in such a beautiful setting, but as we passed the grass huts and mud houses, I couldn’t have ever anticipated the challenges and joys I would face that week.

I am already starting to forget the first night; I’m forgetting the thanksgiving-size meal that I was welcomed with. I can barely remember the crowd of 40-some kids that followed my mother and I to the market—poking me whenever they got a chance to see what I felt like.

I’m forgetting my thoughts as I lay in my bed, next to my newfound sisters. They were squirmy enough not to fall asleep. I couldn’t talk to them, but communicated enough to play a game with them of steal-the-blanket-from-whoever’s-underneath-it-by-any-means-necessary. The scratchy voice of Fene, as she spoke to me through Elizabeth, my interpreter for the next few days, barely exists in my memory anymore.

I am already starting to forget the voice of my host Father, which once seemed impossible. I’m forgetting the annoyance that I had as he made a million incorrect statements about American culture.

I’ll NEVER forget the lesson it taught me about ignorance. As I lay in bed, venting to God (the only person who would listen… hah…), I realized that I probably could have made just as many ridiculous assumptions about Africa. My family laughed at me as I tried to split wood- as I tried to stir their staple food, failing because smoke got in my eyes- as I wore myself out walking… a short distance in their opinion. Who was I to judge this man’s life and knowledge? God started to open my eyes to the beauty found in simplicity, as I was forced to approach every new situation with humility.

I am already starting to forget the small playful voice of my 3 year old host sister, Tracy, who I swear God placed there just to get me through the week. The look on her face as she copied me, “how are you?” not knowing what on earth she had just said, the giggle she had as I threw her up in the air, and the way she melted my heart with her pudgy little tummy as she spoke to me in Kuksabiny, the local language. She was convinced I knew what she was saying. I might forget the way she counted in English, and the way she followed me around, and poured me tea any chance she had. I might forget all those things, but I’ll never forget the relief God gave me through the way she treated me like a regular old person; not a rich, unknowledgeable Mzungu.

What will never leave my mind is the fact that the 3rd day with this family, my Father said to me, “Mary—Here is your land. Come back and build someday. Whenever the Lord leads you. I know He will lead you.” I have land. In Uganda. With coffee plants on it. What?

What I will never forget is the amount of kindness the family showed to me every day—the night before I left, My mom prepared chapatti for dinner because it’s my favorite, my Dad meanwhile was hard at work grinding coffee beans for a good two hours so I could take them home with me. The plan for the last day was to get up early and make cassava chips for me so that I wouldn’t go hungry after I left.

What I won’t forget is how quickly I became part of the family. I simply was accepted because I was there. I was loved because how else would they welcome a guest? The incredible hospitality they showed me while I was there reflects Christ in such a beautiful way.

There are a few things about Rural Home stays that I was relieved to leave. I was tired of feeling like an outsider, and tired of being misunderstood by the end of the week. But as I left this family that I would possibly never see again, I couldn’t help but consider for a moment the offer my host father gave me... “Mary… they will come for you, but you must stay here… we will dodge them as they come for you…”

There was something so beautiful about the simplicity they lived in. Yes, it was probably one of the most difficult things I’ve ever done in my life, and it brought up a million questions in my head about globalization and westernization (that’s a whole different conversation... ask me bout it sometime J). But other than the intense processing that went on in my head during the time I was there, it was refreshing to focus only on the necessities— farming, cooking, and being with each other. The kind of lifestyle they lived would be considered poverty in America, but they literally had everything they needed. They ate like kings and owned little, but enough clothing. The land they farmed was large enough to give me my own piece, and school fees were difficult, but God was providing.
A classmate of mine said it succinctly when reflecting on the experience:
"If I were to give something... what would I give them? They have all that they need. Nothing I could give would really be useful to them."

As I get back into the routine of internship and school and a little bit of a busier Uganda, I thank God for the challenge that Rural Home stays brought, and the joys that I couldn’t have ever anticipated about rural life in Uganda. It challenged my perception of Africa, and my perception of myself.

J ANYWAYS. Beyond this explanation, ask me more if you’d like more… see below for some pics to get a visual of my week in Sipi, Kapchorwa. 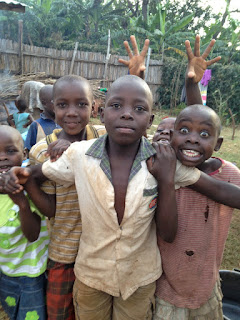 Some of the kids that followed me around all week :) On the far right is my little sister, Fene. What a face. 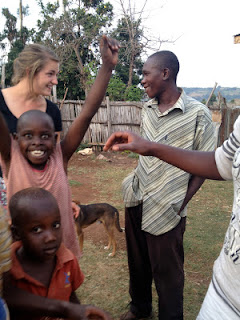 Haha. Camera love there on the far left. 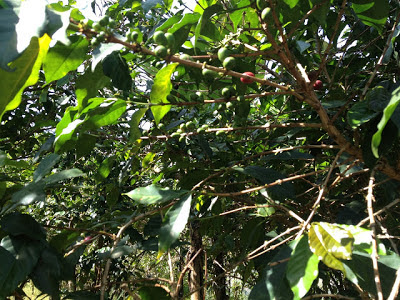 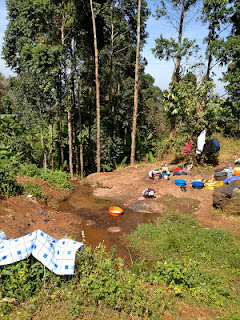 One of the many washing areas in the village. 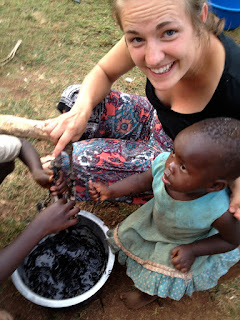 Tracy and I cleaning the chicken that I slaughtered a few minutes earlier. 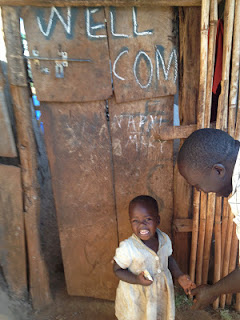 LOOK at that smile. I miss it already. 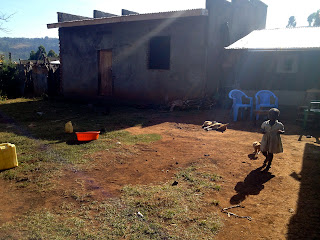 This is my yard. The house on the left was a storage area for vegetables, etc. It will soon be turned into a home-- one of the nicer ones in the area. 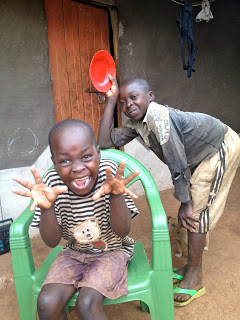 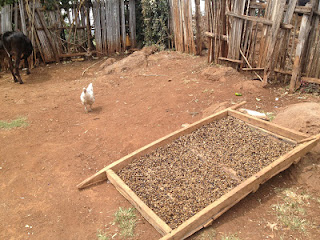 Coffee beans that my dad was drying... I would later pound my own coffee from these :) 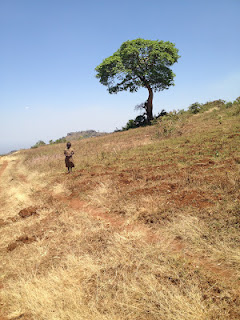 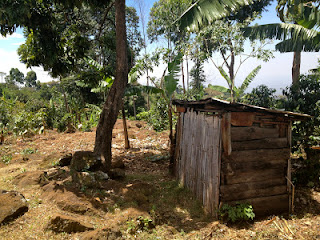 And here's my backyard... that's my bathroom right there. 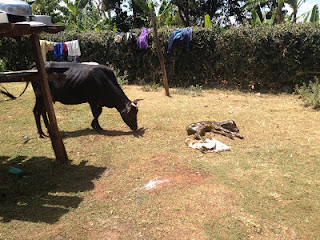 And of course, the calf that my dad named after me... I didn't want to take pictures of the birth, but I had to document in some way, as this little guy is my namesake... 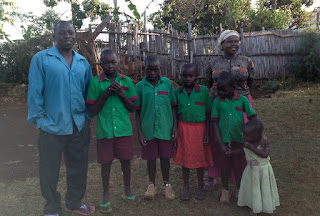 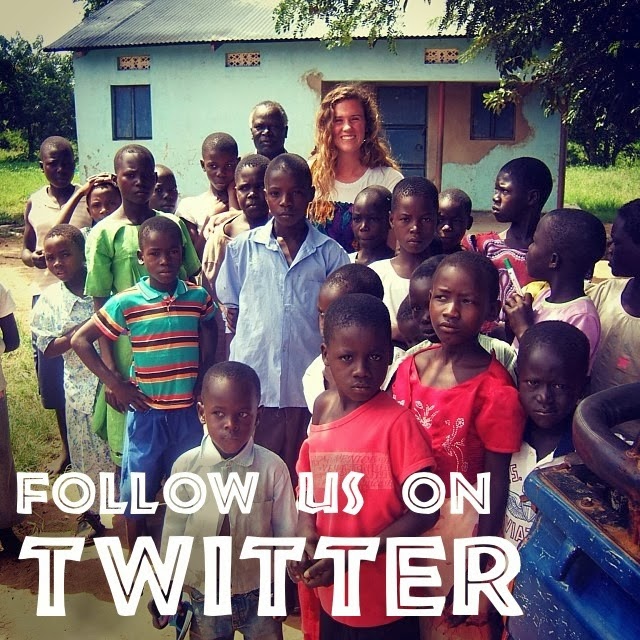